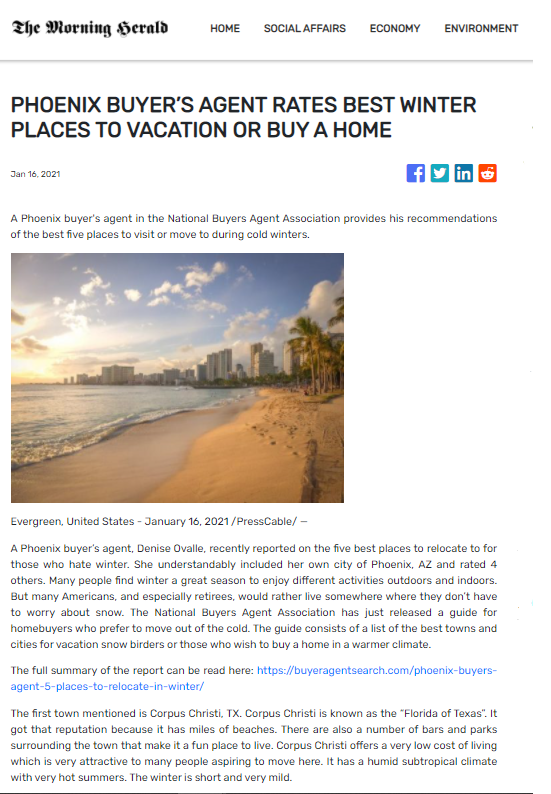 A Phoenix buyer’s agent in the National Buyers Agent Association provides his recommendations of the best five places to visit or move to during cold winters.

A Phoenix buyer’s agent, Denise Ovalle, recently reported on the five best places to relocate to for those who hate winter. She understandably included her own city of Phoenix, AZ, and rated 4 others. Many people find winter a great season to enjoy different activities outdoors and indoors. But many Americans, and especially retirees, would rather live somewhere where they don’t have to worry about snow. The National Buyers Agent Association has just released a guide for homebuyers who prefer to move out of the cold. The guide consists of a list of the best towns and cities for vacation snow birders or those who wish to buy a home in a warmer climate.

The full summary of the report can be read here: https://buyeragentsearch.com/phoenix-buyers-agent-5-places-to-relocate-in-winter/

The first town mentioned is Corpus Christi, TX. Corpus Christi is known as the “Florida of Texas”. It got that reputation because it has miles of beaches. There are also a number of bars and parks surrounding the town that make it a fun place to live. Corpus Christi offers a very low cost of living which is very attractive to many people aspiring to move here. It has a humid subtropical climate with very hot summers. The winter is short and very mild.

Second on the list is Wilmington, NC. Wilmington had won an award for “America’s best riverfront”. It is a historic city with a long wooden walkway that wanders along the Cape Fear River. The town is surrounded by restaurants which offer incredibly tasty food. Wilmington also has a humid subtropical climate where winters are generally mild. The spring is quite long and the summer brings daily high temperatures ranging from the 80s to lower 90s °F. These kinds of temperatures are what many people look for if they hate winters.

Two more towns make the list in the report.

Last but not least in the lineup is Phoenix, AZ. Phoenix is the largest city in the state and is also known as the “Valley of the Sun”. This sprawling city in the desert sees a lot more sunshine compared to most other areas in the country. Phoenix has been classified under the Köppen climate classification as BWh, meaning it offers low annual rainfall and low relative humidity. Anyone who hates winter will find this place the perfect place to live in permanently or just stay for temporarily during the winter season because summers are incredibly hot.

The National Buyers Agent Association, managed by Skyfor, has given real estate buyers and sellers assistance for more than 20 years. Initial home buyer counseling is provided through this service. The service suggests top buyer agents in all 50 states can be found here: https://buyeragentsearch.com/associations-and-real-estate-agents/. This free list of agents is available 7 days/week and live staff is available to discuss specific questions by calling their office at 800-383-7188.

Skyfor also manages the non-profit Colorado Exclusive Buyer Agents Association for buyers seeking to buy in Colorado,. Colorado is a place where the residents generally love winter, but many vacations to the above-mentioned cities in the colder months.

Don’t overpay for your dream home!
A pro buyer's agent protects you.
A buyer's agent gets offers accepted.
Get a free list of association members now.

All of our agents belong to professional associations that have high standards of practice and codes of ethics.

Both Buying and Selling? Get our Suggestions for Best Seller's Agents
Get now
Back To Top